I don’t really have any idea. But starting to think about it.

I updated my book website with some new things.

Okay, things are starting to get real. Today is the day I begin to share a lot more about this book on productive disagreement I spent the last 3+ years writing with the broader world. You all have been patiently hearing about it the whole time, so I want to both thank you and extend deep apologies for the next month or two.

I just added a few things to this book website:

Take a look and if you think of others who might enjoy the book, please share it!

How long does it take to write a book?

I made this a while ago but it continues to be super interesting to look at as time slowly continues to pass. It’s a timeline of all the ups and downs I’ve had over the last couple years while writing this book. Each of the boxes is a week, and each of the chunks is a year: 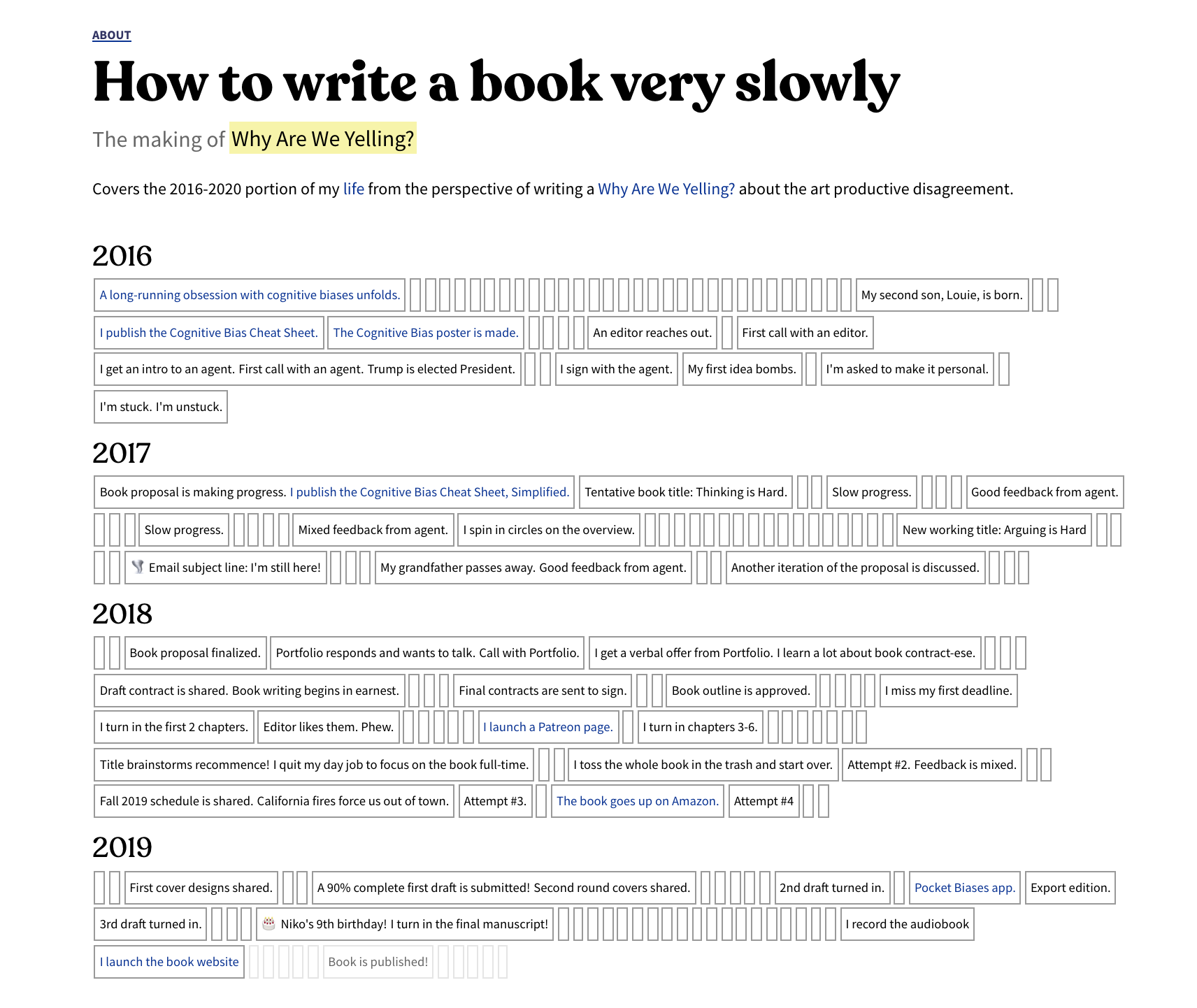 I’ve been doing a review of my life every year around my birthday since 2006. You can last year’s reflection about digging deeper, and the other 12. The primary formative event of my last year was changing careers and re-entering the world of independent creator living.

One way to see this is as a cycle I’ve now been through twice of moving from large companies to small companies. This year I oscillated back to independent creative work after 6 years at big tech companies. A brief history of my career is: I joined Amazon in 1998 and left in 2003. From 2003 to 2012 I co-founded several startups (Robot Co-op, McLeod Residence, Habit Labs). Technically Robot Co-op became part of Amazon during that time, but I left before it was re-absorbed into the mothership. From 2012 to 2019 I spent another six years at Twitter, Slack, and (briefly) Patreon.

Green is when I worked at these companies. The y-axis represents approximate number of employees at the company, on a logarithmic scale.

And here I am back on the 1-human rickshaw. Honestly, when I joined Twitter in 2012 I didn’t think I’d last more than a year or two at larger companies, but I think I underestimated how meaningful and creative the work there would be. I’m ready for another year of independent work, but at this point I see the trade-offs at both ends of the pendulum.

It’s tempting to always rationalize why our current position is optimal, but as I get older it’s a lot easier to see how things move in …

Keep your friends close and your cognitive biases closer.

You can have every bias in your pocket by adding this website to your mobile phone’s homescreen.

This app is built using a really cool new service from Glide that lets you turn any spreadsheet into an app. 99% of the awesome here is thanks to their great work.

Since I get this question a lot, I’ll answer it pre-emptively. “What can I do to be less biased?” My answer, after thinking about this for many years, is that the best we can do is to reduce the time and energy we expend trying to defend our biases and blind spots when they’re challenged. I call it developing honest bias.

Some tips on how to use this app to develop honest bias:

1. Focus on the strategies more than the biases

You don’t need to remember all 200 biases, because you can look them up here any time if one’s on the tip of your tongue. Instead, it might be easier to remember the 13 strategies. They represent the shortcuts we take in order to make decisions and take actions.

2. Consider what causes the anxiety that leads to bias

3. Notice bias in our brains and in everything else around us …

Continue reading (est. 1 min read) →
Added to the Cognitive Biases pile.
Part of the Pocket Biases and Why Are We Yelling? projects.
May 10, 2019

An interactive essay on how things diffuse through networks. Way more interesting than it sounds!

From Kevin Simler.
Added to the Systems thinking pile.
May 10, 2019

History of a bias that got ahead of itself.

Added to the Cognitive Biases pile.
Part of the Why Are We Yelling? project.
April 12, 2019

A 1–pager outlining evidence of the problem, diverse perspectives, and existing initiatives that attempt to address the problems.

The Green New Deal is a 1-Pager for America

It's meant to spark a conversation, so let's talk about it!

Added to the Dialogue, Critical Thinking, and Policy piles.
Part of the Fruitful project.
February 26, 2019

Added to the Dialogue pile.
Part of the Fruitful project.
February 26, 2019
< older pieces
ABOUT ME

Contact me
JUMP TO
Blogging
Ooh look, a book
43: All in & with the flow
Pocket Biases
Going Critical
Well that backfired
$1/month early bird special ⛅️
Oakland schools are struggling
The Green New Deal is a 1-Pager for America
Guidelines for Fruitful Dialogue