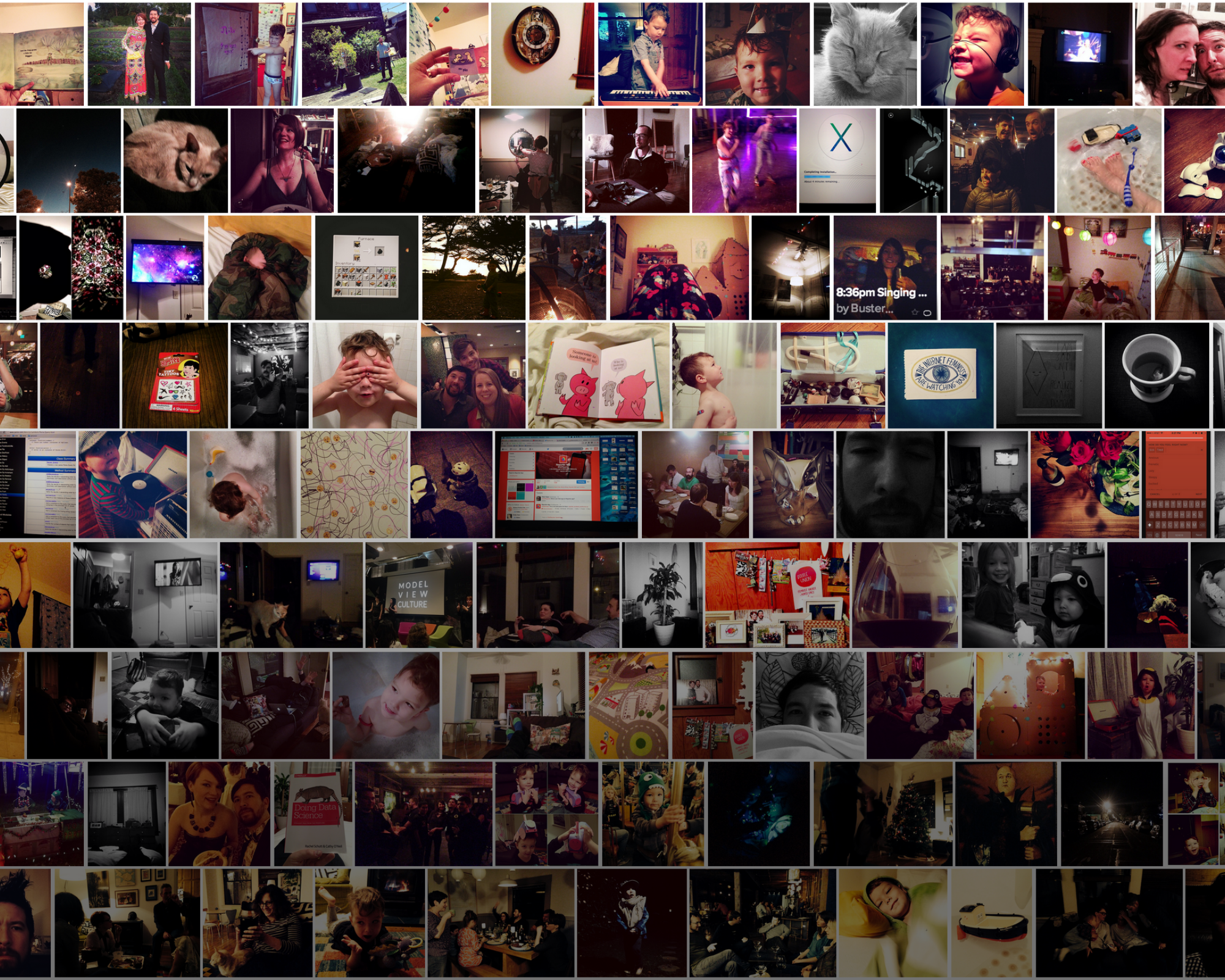 This is my 9th year of yearly birthday reflections. Here are the previous 8:

My 37th year started off on an exploration of the kiloslog, which is my made-up word representing the idea of working slowly towards a distant goal (see 1 Metric Kiloslog for a full explanation). I set the goal to do 1,000 small things that would get me closer to running a marathon. I’ve been thinking about this all year and ended up finally going on a couple 5+ mile runs in the last few weeks after spending almost an entire year working on knee issues. I actually felt quite victorious even with this small goal since the frustration of this particular knee issue has felt extremely frustrating in its lack of progress despite PT, stretching, and lots of patience. I’m still not entirely sure that I’ll be able to fully recover without giving in to knee surgery, but since it’s gotten a bit better recently I’m holding out hope. That said, I also have a referral for a good local orthopedic surgeon to take a look the second I lose hope. I did stop using technology to track my progress around 900/1000, because I found that the work of tracking was as difficult as the work itself. A common theme in my frustrations with quantified self and self-tracking in general.

In addition to working on the kiloslog towards running a marathon, I’ve also started fixating on an even longer-term health vision: to ride a bike on my 100th birthday. I like thinking about this for a couple reasons:

This single, silly, vivid health vision informs my eating habits, my exercise routine (for the kiloslog and other stuff), my stress levels, my creativity, and my social habits. It’s a single ribbon that ties it all together, paces me, keeps and makes me happy to think about.

What would you like to do on your 100th birthday? Replace 100th birthday with whatever birthday you think represents the pinnacle of a life worth living. If you think of something, tweet it to me.

That’s basically where my thoughts on behavior change, health-improvement, and quantified self ended up for the year. Nothing earth-shattering or billion dollar start-up worthy, but it feels right to me and I’m gonna stick with it for now.

New ideas for the new year

A couple themes / ideas have been swirling around in my head, seemingly unconnected for the most part. The kiloslog mentioned above is one of them. Here are some very brief descriptions of a few others:

A. A variety of options that aren’t connected to one another. For example, if you have 3 green eggs in 3 baskets and a green-egg eating monster comes, you’re going to lose all of your eggs even though they were in different baskets. Same if you own 3 different houses that are all on the same block and it gets hit by a flood, or 3 different emerging tech stocks when the equity markets dry up. True variety would imply that a disaster of any kind won’t take out all of your options… at least 1 must survive and it needs to be a strong one that has traits that led to its survival. Another word to describe this is that the options must be diversified.

B. There should be relatively quick feedback loops. The period of time between “something bad happens” and “the population shifts to favor the stronger options” should be short. If 10 bad things happen before the population adapts, the optionality is lower than if it only takes 1 or 2 bad things to adapt.

C. The adaptations must have some element of randomness. In other words, variety must not decrease over time, even if the environment becomes predictable. Eventually the environment will change in a new way, and then the variety will need to be sufficient to survive an unexpected change. If a green-egg eating monster turns into a red-egg eating monster, there should be some non-red eggs, and maybe even some green eggs, around.

This makes logical sense, but in practice it seems counter-intuitive to build systems with high optionality. We tend to build systems that converge on a single design over time (see monocultures) because they are predictable and efficient in a given environment. But environments change, and without the ability to predict how those changes will happen ahead of time, optionality is required even in the safest of environments.

I rambled on even longer about this topic here: Live like a hydra.

I first came across this idea last year and found some interesting explorations of the idea referenced by the word umwelt, which is German for “environment” or “surroundings” and pronounced ooom-velt. I just made up the term soloverse because it’s easier for me to think of it as a private universe in our minds.

A few thoughts about soloverses:

A. The soloverse is our local cache of the universe. When we’re babies, our caches are not very primed, and we are forced to take in the full firehose of the universe… unsorted, uncategorized, raw. It’s overwhelming. Our brains are designed to start building this soloverse almost immediately in order to gain some foothold on the raw craziness of all the information coming in. The soloverse is built up from basic building blocks like light and dark, smells, sounds, and eventually patterns (mom, hungry, cold, soft), and then eventually concepts (blanket, food) and meanings (safe, scared, good, bad).

B. What we think of as the universe is actually our soloverse. From these basic building blocks we create beliefs and build simulations that allow us to predict future occurrences (if I cry, mom will come to me). At some point we arrive at a concept of our own selves and other people. “The concept of a person is arguably the most important interface ever developed.” — Kevin Smokler

C. The soloverse contains gods and archetypes. Some of our most powerful beliefs and traditional characters (God, the hero, the devil, the wizard, the fairy godmother) all exist only in our soloverses. Unicorns, dragons, Santa, astrology, luck, fairness, truth, good and evil, beginning middle and end, physics, etc are all shadows of the structure that our soloverse is running on (our brains, and the pattern matching hierarchies that they are built from) and most likely absent from the universe that they are attempting to model. This quirk is actually really fascinating to explore.

D. The soloverse is the most powerful tool we have. The model of the universe that we each have is highly personal, and idiosyncratic to the experiences we’ve had. There are also large portions of which there is probably lots of overlap (common sense, myths, popular culture, things we learn in school, etc). An unhealthy soloverse could lead to poor/misinformed decision-making. An unhealthy soloverse could be responsible for cruelty, prejudice, hatred, wars, and all kinds of other unfortunate things. What could we do to help ourselves and each other have healthier soloverses? Could we address this issue directly and have an impact?

E. A comprehensively complete soloverse must also model every other soloverse that exists. In order to build a real “to scale” model of the universe it has to also include every other soloverse out there, including itself. We can’t escape our personal soloverse, but we can make it a more hospitable place to live in the meantime.

For the last 9 years now I’ve been doing some sort of birthday review. And for the last year I’ve been doing a monthly report that I send out to a small group of friends (inspired by Nick Crocker’s Elephants) with a quick update on monthly progress, some personal stuff, and a hello.

Cultivating quality time means a couple things to me: it means attempting to remove circumstances that hinder quality time, and it means attempting to put into place or strengthen circumstances that encourage quality time. In my time using Reporter (see How I track my life) to get a better sense of the conditions that hinder and encourage quality time, the lowest hanging fruit appeared to be the condition of being well-rested. But I don’t want to get too pre-occupied with lowest hanging fruit. I want to build a sustainable style of living that supports frequent course correction (ie has optionality) towards quality time cultivation and which favors long-term sustainability over short-term momentum (ie behaves like a kiloslog).

Here’s what I’ve come up with, in the form of a draft codex.

Prototype of a Codex Vitae:

Things I’d like to have primed in my brain every morning. This is stuff currently churning in the front of my brain, which probably has high turnover but which also has a good chance of getting somewhere new.

Things I’d like to check in on the 1st of every month.

Things I’ve learned and want to remind myself of every year on my birthday (May 28).

The latest version of this Codex is available on Github.

So, yeah. Life is good. 38 is good. Looking forward to more quality timez.

Added to the Self-reflection and Quality time piles.
May 28, 2014
ABOUT ME