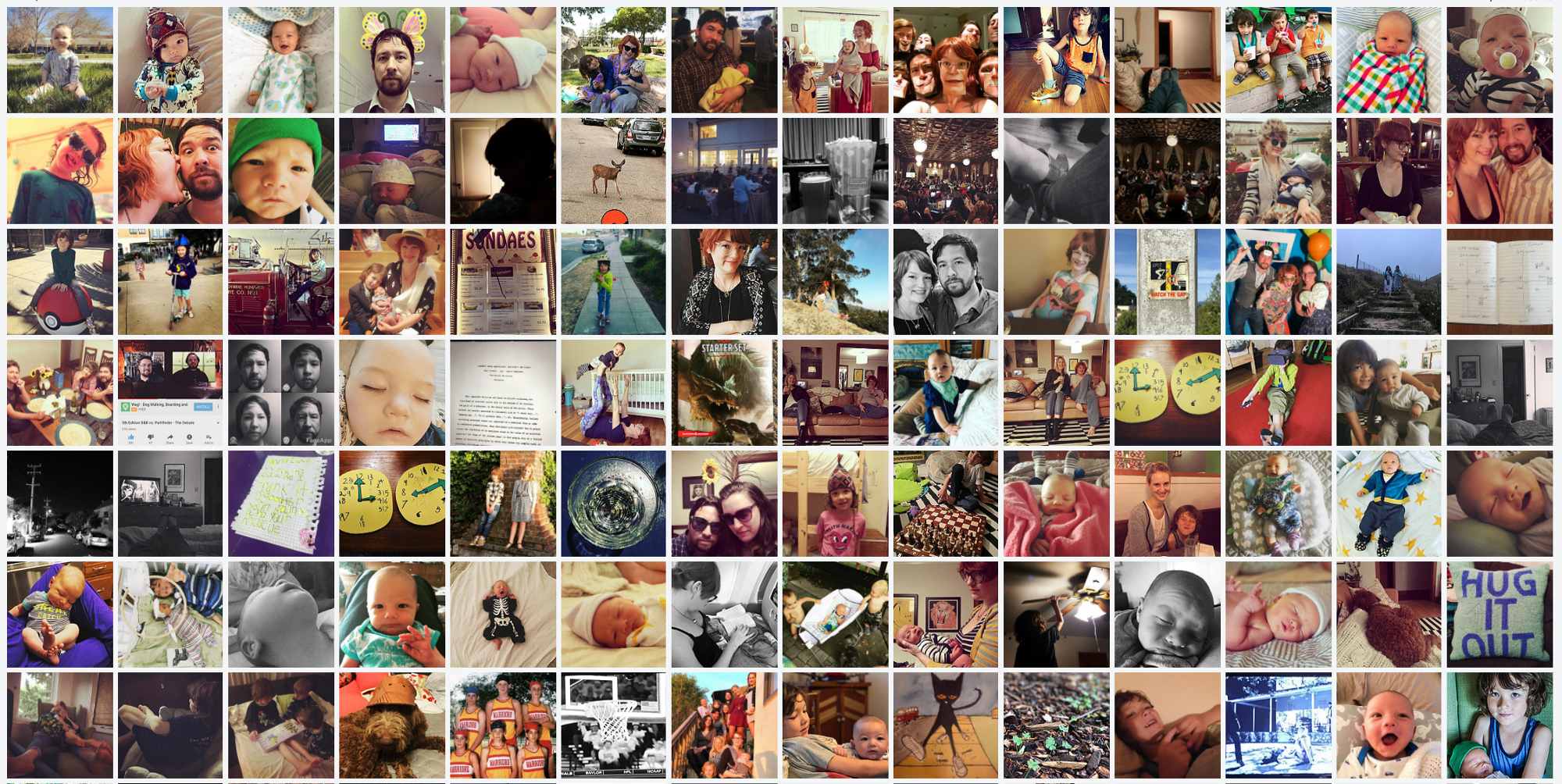 This is my 12th year of yearly birthday reflections. Here are the previous 11:

Random aside: if you look at the locations for these 12 years of birthday posts, you can see that they started on LiveJournal back in 2006 for the first 3 years, then they were on a Wordpress site I had for a long time (but which has since died and so I’ve archived them on Github), then 2 years on Tumblr, then 1 year on Svbtle, and the last 4 years have now been on Medium. I wouldn’t have guessed that Medium would remain my publishing platform of choice for longer than all of the others (other than maybe LiveJournal, which extends back to at least 2002). But here we are! I’m thankful for Medium and am happy to be an early adopter of their new membership experiment. Long live Medium!

In my Life by Weeks chart on busterbenson.com, two events stood out from the rest: Louie Phoenix Benson was born on August 6th, and Trump was elected on November 8th. They were quite different in terms of how I reacted to them. I also started writing a book about how to draw better conclusions while avoiding bias, and took on a lead role at Slack for the platform team.

The last year really was a lot about minding the loops. The now see feedback loops, and systems, and cycles everywhere I look.

It’s really true that the world isn’t linear — it’s loopy! But the loops are so intricate, often untraceable, and interdependent, that minding them is only enjoyable if I also let myself get lost in them a bit. I mind them in the same way I mind the stars, and long distances of space and time… appreciating the glimpses I get, but not really getting to the bottom of anything. A loop has no bottom.

In the small glimpses I get, though, there’s a piece of the loops that has begun to stand out to me and it’s helped me understand why some systems are so difficult to understand or see. There’s often a stage within any system where things lose cohesion, or visibility, for extended periods. When a loop or a system gets tough to follow.

Most cycles have a dark part. And darkness is generally not sought out, or invited into our explanations. We prefer ideas that sit nicely in an Occam’s Razor type of articulation. In the 4 conundrums model of how we understand the world, we filter out the dark parts of the world early and often.

And yet. The dark part is so crucial. Without the vastness of empty space, everything would just be a giant ball of burning flames that crushed itself under its own weight. We need that darkness to create some sense of separation so that things can operate independently long enough to do something interesting. It’s only through extended separation that different species evolve. It’s only through the vast spaces between your brain and mine that we can think of each other as different people.

And then there’s the darkness of the world. With Trump in power, the darkness feels a bit overwhelming, and it’s obviously natural to want this era of darkness to end. But the pressure of that darkness is the churning motivation that will fuel the next era, whatever that is.

My father died in the same year of his life that I’m entering of my own right now. I’m still recovering from that, and still resist attempting to imagine what it must have been like to say goodbye to wife and a son and a daughter, not to mention goodbye to one’s self.

Think about it. The light is where everything is seen and understood (or where we at least think it is). Things make sense. There’s a shared understanding. A plan. But what do our eyes do in the light? Our pupils constrict. They narrow. And we get accustomed to the light and prefer to stay in it, where things are all figured out.

On the other hand, the dark is where things can’t be seen. Especially when you’ve been in the light for a while. There is no plan. Nothing makes sense. But our pupils dilate and slowly adjust… there’s a seeking, a deep desire for exploration, curiosity, and we rely heavily on any tools or people around us to help us figure out what’s going on.

If enlightenment is the desirable end state where everything has been brought into perfect clarity, endarkenment is the moment when we become comfortable in the darkness, in the lack of perfect clarity, when we’ve realize that we’re moving backwards, that we were wrong about a whole lot of things. Where we open our pupils, exposing ourselves to possible additional damage, but even so confidently seek the help of others because we need them.

Even with everything going on in the world with Trump, and hate, and backwards progress, in the spirit of seeking endarkenment I feel like my only path forward is to accept that we messed up. We became so obsessed with progress, and advancement, that we didn’t get everyone on the wagon. Not by a long shot. A huge chunk of the world isn’t progressing, isn’t advancing, even amongst the people we have around us, and it’s our fault for leaving them behind. Instead of spending hours every day reading about the latest terrible thing Trump has done, let’s instead start thinking about how we begin to include the people who have had the same salary for 20 years, even while everything has gotten more expensive and more inaccessible. Let’s seek endarkenment on this and see where it goes.

Here’s a some things I am a bit in the dark about at the moment, and am curious to see where they lead:

It’s tempting to interpret discomfort in the dark as motivation to find the nearest answer. It’s a bit of an extension of the Spotlight Effect (where we only look for answers in areas that we feel clarity about). When we find ourselves in the dark, we assume the first answer/explanation we find is the right one. Instead, I’d like to sit in the dark a bit longer, let my eyes adjust a bit more, and wait for new information to slowly reveal itself, even if it’s quiet at first, and feels different than the answers I’m used to finding.

To that end, I’m going to be spending a bit more time this year refactoring my codex. I’m testing having it hosted in a slightly more readable place in GitBook, which is pretty perfect for this use case.

If you are interested in downloading my Book of Beliefs in an ebook format, you can let me know if this is useful at all by trying these links and letting me know how it goes: Kindle version, iBooks version.

I think I’ve sufficiently over-engineered my yearly report post. Have a nice day!

🎂 Here's a review of my last year, and a motto for my 41st year: seek endarkenment https://t.co/41tcjr1KJT

Added to the Self-reflection and Negative space piles.
May 28, 2017
ABOUT ME