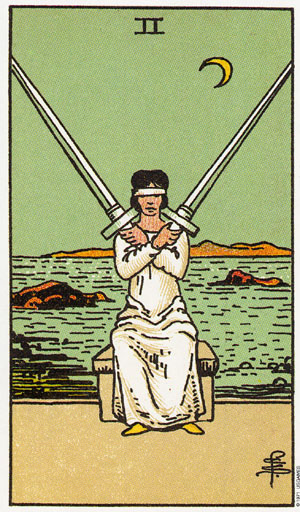 Light: Refusing to make a decision without getting the facts. Exploring both sides of an argument. Arguing passionately for what you believe in. Weighing the issues. Encouraging the open exchange of ideas. Discussing political or religious issues without getting “hot under the collar.”

Shadow: Rejecting evidence that conflicts with dearly-held beliefs. Arguing with others just for the sake of doing so. Nit-picking. Putting off a decision because you’re afraid to face the consequences. Preventing others from getting the information they need to make good decisions.

Personal Growth: What are you avoiding? Growth awaits the souls brave enough to cast aside blindfolds and see the situation for what it really is. Get past this personal stalemate by taking time to think clearly about what you want and where you’re going.

Work: Consider all the facts before making your decision. Once you’ve made your decision, be prepared to defend it with well-reasoned arguments. If others continue to reject your counsel, be aware that you may have to let go, sit back, and let time prove that you were right, after all.

Relationships: You may be in denial; if so, you’re only fooling yourself. You serve your own best interests by seeing things as they really are. Stop avoiding unpleasant confrontations. An honest disagreement is better than a false peace.

Spirituality: Spiritual maturity demands we see ourselves as we really are—and love ourselves in spite of our shortcomings. Rather than debate whether or not you’re “good enough,” be thankful for the progress you’ve made thus far. Avoid beating yourself up with high-minded standards of perfection.

Fortune-Telling: Sometimes, the only way to win is to not play the game. You’re stuck for now; let time pass before taking action.

Fool's Journey: The main character must defend his or her decisions. Alternatively, the Main Character rejects critical information and makes a bad decision.

Blindfolded Figure: In RWS-inspired decks, we frequently see a blindfolded woman grasping two broadswords on the Two of Swords. Set apart from the waters of intuition, for better or worse she is depending solely on logic to make a difficult decision.

Blindfold (or lack thereof): Themis on the Justice card doesn't wear a blindfold, emphasizing her ability to foresee the future; Justitia does, emphasizing her objectivity. In RWS-inspired decks, we frequently see a blindfolded woman grasping two broadswords on the Two of Swords. Set apart from the waters of intuition, she is depending solely on logic to make a difficult decision.

Crescent Moon: Many versions of the Two of Swords depict a sky punctuated by a crescent moon -- a symbol for receptivity and cyclical change. What would happen if you took a “wait and see” approach to your current dilemma? How might your situation change over time?