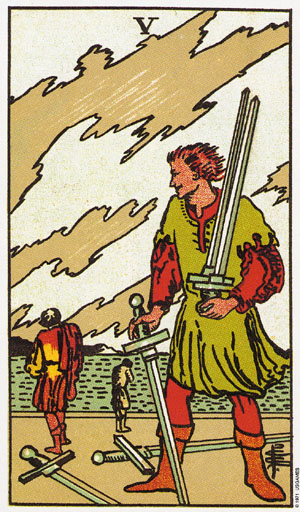 Light: Acting in your own best interest. Choosing to stand up for yourself. Not backing down from disagreement and discord. Taking a stand. Refusing to go along with an unethical plan. Knowing when to bend the rules.

Shadow: Taking advantage of others. Intimidating others. Acting in an unethical manner. Picking fights. Using words to goad others into violence and irrationality. Ignoring rules you’ve agreed to abide by. Looking out for yourself while allowing harm to come to others. Gloating over victory.

Personal Growth: You can’t win every fight. With this truth in mind, think in terms of how you want to win…and how you want to lose. Rather than be driven by emotion, make conscious choices in both situations. Resolve to be noble in both victory and defeat.

Work: Occasionally, one person’s success will bring about another person’s loss. When you’re the successful one, don’t gloat; be humble. When you suffer the loss, don’t despair; pick up the pieces and move on. Don’t drive yourself crazy asking “Why?” Breaking a rule may prove to be the key to innovation.

Relationships: It’s crazy to think that one person in a relationship deserves more pleasure or power than the other. Balance must be restored. You’re not thinking clearly now, so back off and rethink your approach. Take care of yourself, but try to do so without hurting those you love most.

Spirituality: Suffering is a fact of life. How does your spiritual path deal with the reality of suffering or the pain of inequality? It’s easy to be spiritual when all is well. Insulate yourself from instability by thinking—in advance—of how you’ll deal with adversity when it comes your way.

Fortune-Telling: Someone is stealing from you, financially or romantically. Be wary of friends who talk behind your back.

Fool's Journey: Others are shocked or angered by the main character's apparently irrational actions. Alternatively, the Main Character must take an action that will cause pain for his or her loved ones.

Stolen Swords: Many see the figure in the foreground of RWS-influenced 5 of Swords as a thief, stealing swords at the expense of his associates. Just remember: victory achieved through dishonesty robs you of your integrity, and often causes some retribution to bounce back in the future.

Smug Figure: The knight depicted on many versions of the 5 of Swords appears to be gloating over his triumph. How we act when we get our way reveals a lot about our character.